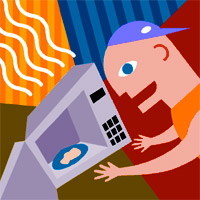 Microwaving - Healthy Or Not?

Microwave cooking may pose some health risks, according to a comprehensive post on relfe.com.

Research for yourself, then decide if microwaving is for you.

After the World War II, the Russians also experimented with microwave ovens. From 1957 up to recently, their research has been carried out mainly at the Institute of Radio Technology at Klinsk, Byelorussia. According to US researcher William Kopp, who gathered much of the results of Russian and German research – and was apparently prosecuted for doing so (J. Nat. Sci, 1998; 1:42-3) – the following effects were observed by Russian forensic teams:

1. Heating prepared meats in a microwave sufficiently for human consumption created:
* d-Nitrosodiethanolamine (a well-known cancer-causing agent)
* Destabilization of active protein biomolecular compounds
* Creation of a binding effect to radioactivity in the atmosphere
* Creation of cancer-causing agents within protein-hydrosylate compounds in milk and cereal grains;
2. Microwave emissions also caused alteration in the catabolic (breakdown) behavior of glucoside – and galactoside – elements within frozen fruits when thawed in this way;
3. Microwaves altered catabolic behavior of plant-alkaloids when raw, cooked or frozen vegetables were exposed for even very short periods;
4. Cancer-causing free radicals were formed within certain trace-mineral molecular formations in plant substances, especially in raw root vegetables;
5. Ingestion of micro-waved foods caused a higher percentage of cancerous cells in blood;
6. Due to chemical alterations within food substances, malfunctions occurred in the lymphatic system, causing degeneration of the immune system=s capacity to protect itself against cancerous growth;
7. The unstable catabolism of micro-waved foods altered their elemental food substances, leading to disorders in the digestive system;
8. Those ingesting micro-waved foods showed a statistically higher incidence of stomach and intestinal cancers, plus a general degeneration of peripheral cellular tissues with a gradual breakdown of digestive and excretory system function;
9. Microwave exposure caused significant decreases in the nutritional value of all foods studied, particularly:
* A decrease in the bioavailability of B-complex vitamins, vitamin C, vitamin E, essential minerals and lipotrophics
* Destruction of the nutritional value of nucleoproteins in meats
* Lowering of the metabolic activity of alkaloids, glucosides, galactosides and nitrilosides (all basic plant substances in fruits and vegetables)
* Marked acceleration of structural disintegration in all foods.

As a result microwave ovens were banned in Russia in 1976; the ban was lifted after Perestroika.”

We always recommend that you consult with your physician and certified health professional practitioners regarding
ANY and ALL health questions and concerns. All information contained within this website is for educational
and/or entertainment purposes ONLY.

Take charge of your health! Be knowledgeable, informed, independent, discerning! : )